USB-C is the hot new standard being tossed around technology circles, and it’s certainly nothing to shake a stick at. USB-C was created by the USB Implementers Forum, which includes 700 companies (including Apple, Dell, HP and more.) What makes this significant, is that each of these companies have released computers that run with USB-C connections already.

So, what does this mean? Will USB-C mean the demise of other connections, including Apple’s proprietary Lightning Cable? The writing does seem to be on the wall, but still not for some time yet.

Apple is largely the only user of the Lightning Cable. They developed it and do license the use of it, but not many companies have offered much more innovation with the port. 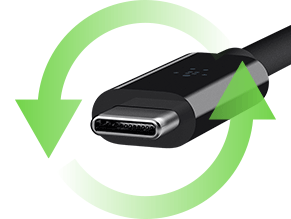 Smart-phone and tablet makers are constantly working to thin and lighten their devices. That’s why Apple developed the Lightning Cable, so that they could ditch the larger 30-pin adapter and go with something with a smaller form factor.

Incidentally, the USB-C is doing the same thing for notebooks, and still has the small form factor. The USB-C connector is just about the size of a micro-USB, and it has the ability to both power devices and transfer data quickly.

Theoretical numbers put the USB-C at twice the speed of USB 3.0 and on par with Apple’s Thunderbolt at 10 Gbs per second.

Apple is even using the USB-C as the lone connector on the 2015 Macbook, which has a headphone jack besides. The 29-watt battery of the Macbook is also capable of being charged by USB-C.

With Apple reportedly ditching the headphone jack in the newest iPhone, and utilizing the Lightning adapter for headphones, could that mean that a more standard port (like USB-C) is coming? Particularly when Apple has been sued for not having a standard port, but instead using Lightning in the past?

A Standard With Lots of Flexibility

The USB-C connector also supports DisplayPort, HDMI, USB and VGA, opening a host of possibilities for the iPhone and iPad.

Could it replace Lightning? Probably not yet. Apple isn’t know for jumping on the bandwagon, but they have stated that the Macbook is a clear sign of where the company is going in the Future.