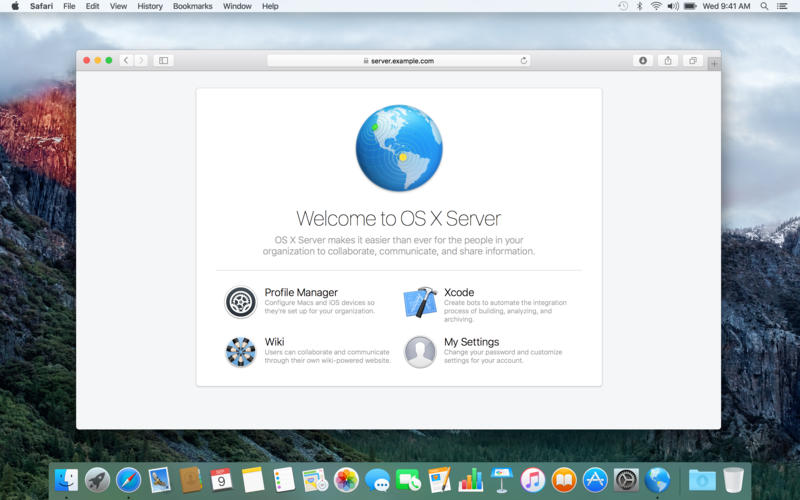 Apple has released macOS Server 5.2 Beta to developers, with a full released expected this Fall along side macOS sierra.

At Onefruit we have always kept an eye on trending needs of businesses. Technology has always affected businesses and brought paradigm shift in making businesses profitable. When some businesses have not been able to adopt the technological advances, those results in redundant processes. So, our aim is to make available information seamlessly and reach out to businesses by various media. Our business solutions are simple yet robust.

The need of businesses is multi dimensional and they must be looked at diligently and addressed as fast as possible. In current times, businesses have even become more complex, because of their local and universal spread. Keeping this in mind our business charging and syncing solutions like Chargebus 1050 helps the business workers, visiting clients as well as prospective visitors to use our affordable  , attractive and easy to charging stations.

All our mobile charging stations are quality checked and highly compliant to industry policies. They are compliant to safety and security issues. So be it an Android device or a gadget by Apple with iOS operating system, there is no hesitation shown by business when they procure our solutions.

Another group of mass users of our solutions are at schools or educational institutions. Using our mass charging and deployment solutions, they can easily charge their device. We also make available universal cases for resting them while they are being filled. The design, functionality, safety, higher number adaptability and universality of our solutions make us an emerging and leading seller of mobile deployment solutions.

Apple has released iOS 8.3 with improved performance and bug fixes.

Apple has updated Apple Configurator to 1.7.2 which adds support for iOS 8.3 and new restrictions.

This update requires OS X Yosemite v10.10.3 and iTunes 12 or later. It includes the following improvements:

To create or install an iOS configuration profile, use Apple Configurator or a Mobile Device Management (MDM) solution like Profile Manager (included with OS X Server)

iLounge have discovered that the new iPhone 6 and iPhone 6 Plus support fast charging. Like it’s bigger bother, the iPad. The 6 and 6 Plus are capable of using 2.1 Amp charging but they still ship with the 1 Amp charger.

All of our Chargebus sync & charging stations support 2.1 Amp charging, ready for your new iPhone 6 and 6 Plus’.

Enterprise iOS has posted a simple guide to updating multiple devices to iOS 8.

Step 1: Find a Mac. Any Mac will do. Connect it to the biggest USB hub as you can find.

Step 4: Make sure the “Prepare” tab is selected.

Step 5: Set up the options EXACTLY as they are here. Pay special attention to make sure “Supervision” is off and “Erase before installing” is UNCHECKED.

Step 6: Make sure you aren’t installing any apps and aren’t setting anything in setup, in their respective tabs.

Step 7: Double-check the settings. Make sure you have no iOS devices connected via USB.

Step 8: Click the “Prepare” button at the bottom of the screen.

Step 9: Connect the first iOS device. Configurator will download iOS 8 and install it.

Step 10: Connect the second iOS device. It is safe to do this while the first is downloading. It won’t download the same file twice, but it will download the unique version for that model when needed.

p style=”margin-left: 40px;”>Step 12: When you have upgraded all the devices you want, click the “Stop” button.

Apple is planning to expand their Volume Purchase Program for Business and Education to 16 new countries. The list includes:

Apple has not announced a launch date for the new countries yet.

As previously announced, Apple has updated it’s iTunes U app for iOS. 9to5Mac has got a good summary of what’s new in iTunes U 2.0.

• Teachers can now create and update their courses using the iTunes U app on their iPad—getting started is fast, simple, and completely free
• Provide every student a course outline, write posts, distribute assignments, upload class materials, easily track participating students, and much more
• Take advantage of the built in camera on iPad to easily capture photos or videos and upload them for course assignments
• Create materials using Pages, Numbers, and Keynote—or other apps from the App Store—and add them to your course by using “Open in iTunes U” from within each app
• Teachers affiliated with qualified institutions have the option to publish their courses to the iTunes U Catalog—making them available to everyone for free

After three years, Apple has finally killed off the iPad 2. Apple has replaced it’s price point with a 16 GB version of the iPad 4 which was discontinued last October.

This is good news for schools and businesses who are look to save money on their deployment but are not willing to purchase extremely outdated hardware. The iPad 2 run Apple’s A5 processor with 512 MB RAM compared to the iPad 4’s newer A6X processor, 1 GB RAM and Retina display.

AFP548 have uncovered that the latest AppleTV update brings AirPlay discovering over Bluetooth. This means that IT administrators will no longer need to worry about users accessing AppleTV’s that cross different VLANS.

Here’s one that will make educators and education network administrators realllllly happy. There’s a hidden gem in the AppleTV 6.1 update that was released today.