The Apple Watch was released in early 2015 to large hype, and has done well in the market. However, one constant complaint has been the battery life. It goes about 18 hours. For most people this isn’t a problem, as they’ve taken to training themselves to charging the watch overnight or when they get home in the evening.

However, due out in Q2 of 2016, smartphone accessory manufacturer Griffin is releasing a Apple Watch battery charger. The device is attaches to your keychain, and they say it’s designed to charge the Watch 4 times before being depleted.

The device itself still requires the user to remove the Watch before charging, but is good in a pinch, as it won’t need to be charged in the wall-outlet. Additionally, the device is easily packed into carry-on luggage or a pocket for quick charging.

Griffin is calling it the Travel Power Bank, and it will only be available for the Apple Watch. Though it comes with a micro-USB, it seems that this is only for charging the Power Bank rather than other devices.

Griffin says the device will be retailing around $69.99 USD.

Still, it’s a great little device if you’re out and about, and unable to plug in your Watch to an outlet. You can still get all those nifty messages, alerts, and encouragements to exercise from the Watch.

Which, incidentally, Apple COO Jeff Williams says has been getting rave reviews.

“Quite honestly we’ve been surprised and very inspired,” Williams said on January 4 on radio program Conversation on Health Care. “So many people have written to us saying it’s helped them lose weight, it’s helped them be more active, they were pre-diabetic and have changed course.”

“And even, we’ve gotten a ton of emails where people are saying the watch actually saved their life,” he said. “In a way we didn’t anticipate we’ve gotten so many emails where people or their cardiologist have written us and said this person detected something on their watch and came in and they had a life-threatening situation and, if we had not intervened, they probably would have died.” 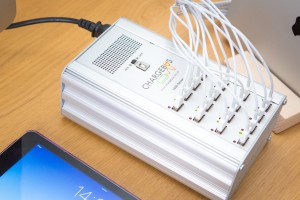